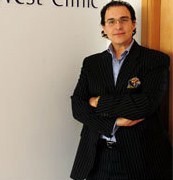 Born in Iraq in 1970. Medicine runs in the family, as Dr Salman’s mother is a pediatrician and his sister in an onco-plastic breast surgeon. He completed his pre-med in Texas, USA. He then moved to Ireland and did Medicine in UCD, Dublin and graduated with Honors in surgery.

He completed his general surgery training in Ireland and afterwards he returned to USA to train under the renowned Dr. Michael E. DeBakey in Cardiothoracic Surgery at the Methodist Hospital in Houston. It was during this time that Dr. Salman decided to branch into the area of Aesthetic plastic Surgery. He then went to Australia to receive further training in Breast Surgery and returned to Texas to complete specialist training in the John Tebbett technique for Breast surgery.

Passionate and innovatory about his work, Dr. Salman has practiced as an Aesthetic surgeon for the last eight years in Ireland. In 2005 Dr. Salman established Park west clinic, a specialized day surgery centre and the first of its kind in Ireland. It encompasses state of the art operating facilities and is accredited by the NTPF. This operating facility incorporates Dr. Salman’s beloved Auralia Cosmetics. The leading cosmetic surgery provider in Ireland with clinics in Kilkenny, Limerick and Dublin.

He has performed over 5000 Aesthetic surgery procedures. He was the first cosmetic surgeon to introduce the Biodynamic Breast augmentation system to Ireland, and the first to use it in Ireland and the UK.

He has a special interest in the Internal Mastopexy Technique and has vast experience in the area of laser aesthetics and Tumescent liposuction.