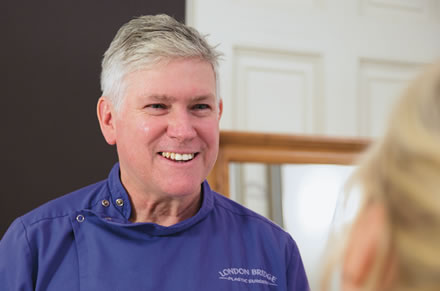 Mr. Christopher Inglefield BSc, MBBS, FRCS(Plast) was born in Trinidad, West Indies, and obtained his Medical Degree from the University of the West Indies in Jamaica and Trinidad in 1985. After attaining his Medical Degree he went on to complete his specialist surgical training in the UK passing the examinations for admission as a Fellow to the Royal College of Surgeons of England.

Mr. Inglefield became passionate about plastic surgery and after 6 years of developing his specialist skills and experience passed the intercollegiate specialist examination (in Plastic Surgery) and was awarded the FRCS(Plast). This confirmed his expertise in all aspects of Plastic, Reconstructive and Cosmetic Surgery and he was admitted on the Specialist Register of the UK General Medical Council.

Mr. Inglefield is particularly noted for the strong and open relationship that he affords his patients. With his approachable, professional manner, he thoroughly understands his patient’s motivations, goals and fears enabling the development of an appropriate treatment plan that keeps the patient’s best interest at heart at all times.

To ensure the service that he offers his patients is constantly evolving to embrace the last technological and surgical developments Mr. Inglefield constantly attends and is asked to speak at many national and international conferences and workshops. Mr. Inglefield has also written several papers and contributed to many specialist books and journals within the field of Plastic and Reconstructive Surgery. He is a member of the UK Association of Aesthetic Surgeons, British Burn Association, the British Microsurgical Society, the British Association of Surgical Oncology and the Royal Society of Medicine – Plastic Surgery.

Mr. Inglefield has appeared on numerous occasions for television and radio programmes including Radio 5 Live, NBC and Granada. (Terry & Gabby, London TV, Kilroy). In addition he has been interviewed and quoted a number of times in national newspapers and magazines, such as The Sunday Mirror, The Sunday Times, The Financial Times, The Daily Mail and Marie Claire, Harpers Bazzar, among others. Mr. Inglefield resides in South West London with his wife and 2 children. A keen sailor, one of his finest achievements was acting as Fleet Surgeon, for the Millennium Round the World Yacht Race, completing the 10,000 mile leg across the Pacific Ocean.

Mr. Inglefield’s areas of specialist interest include Breast Surgery, Breast Implants & Reconstruction, eye bag surgery and facial rejuvenation, Rhinoplasty and Non Surgical Nose Job, Labia Reduction, labiaplasty and gender reassignment surgery, GRS & FFS. The dedicated and experienced team at London Bridge Plastic Surgery & Aesthetic Clinic offers an extensive range of both surgical and non-surgical procedures. Christopher and his team are committed to offering the most up to date and innovative treatments and procedures and the highest standard of care in a stress free and caring environment.