New research has revealed a rise in the number of young women in the US and UK seeking lip augmentation treatments, including lip implants, as a result of a growing fascination with celebrity culture and social media.

According to new findings, the growth in the aesthetics market is down to millennial women seeking aesthetic treatments and cosmetic enhancements to the face, including non-surgical and surgical solutions to lips that need more volume.

More than half of the people searching for cosmetic enhancements are women aged 18-34 according to the figures released by RealSelf, which claims enquiries into lip fillers and lip augmentation procedures using such as lip implants, such as Permalip, are on the rise.

Non-surgical and surgical treatments to volumise the lips are now more popular than ever, with RealSelf suggesting celebrities such as Kylie Jenner – famous for her perfect pout – and Kim Kardashian are behind the spike.

Social media and the daily uploading of photographs to their accounts was also marked as a reason for millennial women seeking treatments such as lip augmentation using lip implants including PermaLip.

Nearly 6 per cent of all searches were for lip augmentation, according to the research which was published on the Mail Online, with an ‘exaggerated pout’ being cited as the goal by one cosmetic doctor.

Of course, lip augmentation is not for everyone, but statistic certainly continue to prove the trend for lip augmentations is only set to rise. Lip fillers may provide a short term solution but lip implants, such as PermaLip, provide the only long term lip augmentation procedure.

For lips that have a lifetime of volume, PermaLip lip augmentation can improve the size and shape of the lips, whilst requiring no top up treatments, unlike dermal fillers and lip fillers. These lip implants are made of soft shelled silicone and can be easily placed under the skin of the lips during a short procedure.

Available only from medical professionals, lip implants such as PermaLip are a reliable and safe product designed to offer natural-looking results for women seeking lip augmentation that doesn’t use lip fillers.

Results of a lip augmentation with PermaLip implants last for as long as the patient wishes to have volume added to the lips, and can be removed at any point in the future – whether that be to remove completely the implant, or to increases the volume of the lip implant.

Undergoing any form of cosmetic treatment should be considered carefully, and a tailored treatment plan should be created with the individual in mind. What is suitable for one patient may not be suitable for another, but generally lip implants such as PermaLip implants can provide a real-touch feel and appearance to the lips – something not always possible when using dermal fillers such as lip fillers.

An alternative to lip fillers, PermaLip implants are a safe and tested form of facial implant made from high quality products to ensure patient satisfaction and safety. If you’d like more information on the benefits of choosing lip augmentation with lip implants instead of lip fillers email SurgiSol.

To find a local clinic or medical professional offering the PermaLip implants for use in permanent lip augmentation, please contact the SurgiSol team today. 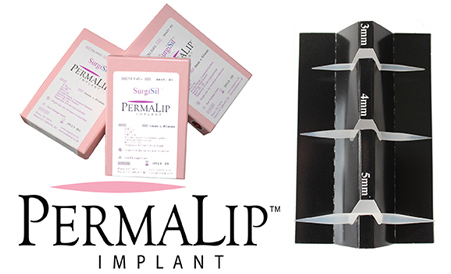 When seeking a quick lip augmentation you would be forgiven for assuming injectables such...
Read More

If you are unhappy with your lips you may find a permanent lip augmentation...
Read More